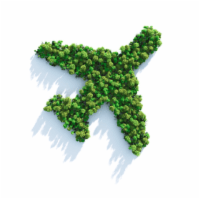 Santa won't be the only one traveling by air during the holidays this season.

More than 6 million Americans – an increase of 2.5% from 2015 – are expected to fly to their holiday destinations this year, according to AAA.

If you're one of these people, and if you're anything like us, you're probably cringing at the thought of having to go through the chaos of the holiday season during peak travel times without weed. We don't blame you. But before you decide to get ballsy and try sneaking weed onto the plane, you should first be aware of a few basic realities about cannabis and air travel.

To help guide you during your holiday journey, we've answered some of our most frequently asked questions about flying with cannabis:

But, what if I have a medical recommendation? Doesn't matter.  Even if you have a medical card, possessing cannabis is a federal crime in the U.S. Still, we suggest that you bring your recommendation with you at all times when you travel. Having it could only help you in case you get caught.

Is it true that the TSA doesn't care about weed anymore? For the most part, yes. The TSA has made it very clear on their website that they're not concerned about people flying with pot: “TSA security officers do not search for marijuana or other drugs.  In the event a substance that appears to be marijuana is observed during security screening, TSA will refer the matter to a law enforcement officer.”  The TSA's primary concern is security and detecting potential threats. Small amounts of weed are simply not a security concern to the TSA.

So, does that mean I can fly with weed without getting in trouble? Not necessarily.  What the TSA is saying is that they do not actively look for drugs, but if they happen to find any, they will rat you out to local police.

If I get caught, what will happen to me?  It depends. In pot friendly states, TSA agents really don't seem to care about small amounts of weed and will likely do nothing and let you board your flight.  At most, the TSA agent will get local police involved, but even then, a local law enforcement officer would have little recourse in states such as California and Colorado, where possession of cannabis is legal.

That being said, the outcome will vary greatly depending on where you get caught.  For instance, getting caught in Colorado will likely be a lot different than getting caught in, say, Texas. In 2014, for example, 29 people were caught trying to leave Denver International Airport with weed and, in each instance, the police declined to file criminal charges despite the fact that possessing cannabis on airport grounds is illegal under local law.  Instead, local police allowed all 29 passengers to board their flights after they agreed to throw away their pot.  This result would likely have been different if the passengers were caught in Dallas airport, where the penalty for possessing up to two ounces of cannabis is punishable by up to six months in jail and/or fines up to $2,000.

How much can I bring?  To stay relatively “safe,” the amount of weed you can fly with depends on your state's possession limits.  So, for California, you should carry less than one ounce.  But we suggest that you carry far, far less than an ounce because you don't want to attract attention.  Be reasonable and take the bare minimum.  Only bring an amount with you that is clearly for personal use – like a few joints or edibles, a vape, or a small container of flowers or concentrate.  The TSA really doesn't care about your weed, but if you attract attention to yourself by trying to bring a big stinky bag of weed through security, you are only asking for trouble.

Checked baggage or carry-on?  According to a 2013 article by NY Daily News, checked bags are often the least checked so hiding your stash there is probably the safest bet.  Regardless of which bag you pack it in though, keep the smell under control by storing it in a smell-proof container.  Bonus points if you pack your medical recommendation with it too.

Will the TSA K-9's sniff out my stash while I'm waiting in line at security? No need to freak out. Those K-9's at the airport are BOMB dogs, not drug dogs.  They are trained in detecting one thing only – explosives.  Not the tiny amount of weed in your bag.

Is it illegal to be high on the plane?  No, federal law doesn't prohibit passengers from flying under the influence of drugs.  However, if you are too intoxicated, the airline may prevent you from boarding the aircraft if they believe that your behavior could become a hazard to crew members and/or other passengers.

What if I'm only flying within California or within another state where it's legal? Technically, this is still illegal because cannabis possession at the airport violates federal law.  But just because something is technically illegal doesn't mean that law enforcement is, well, enforcing the law.  The experiences of passengers in states like Colorado and California have shown us that the TSA will likely just confiscate your pot and throw it away, as opposed to prosecuting you.

What if I'm flying cannabis from California to another state where it's legal? This is technically extra illegal due to the fact that it's crossing state lines.   But, again, what happens when you get caught will depend on local laws and law enforcement.  It's hard to envision a TSA agent in Denver arresting a passenger for bringing a small amount of weed from L.A.

Can I fly with cannabis on an international flight? No, no, no.  Do yourself a huge favor and don't even think about trying.

Wishing you all safe and happy travels!