Is it in the Cards? Trump-ing the Federal Ban on Marijuana 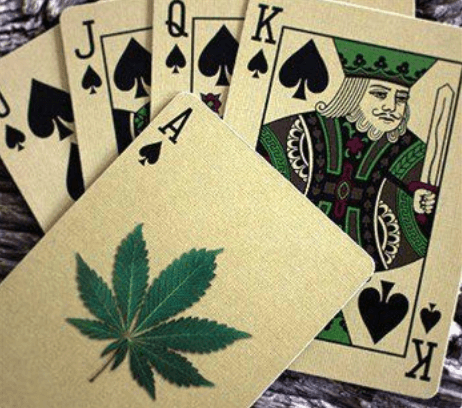 In late May, 2018, a bipartisan coalition, including Republican U.S. Sen. Cory Gardner of Colorado and Democratic U.S Sen. Elizabeth Warren of Massachusetts, introduced SIL18725 or “The STATES Act,” a proposal to amend the Controlled Substances Act to end the federal ban on marijuana.

The proposed bill would not legalize marijuana, but would instead reform the current Controlled Substances Act and protect those that use marijuana in compliance with state and local laws. If passed, the STATES Act would empower cannabis businesses in California and other states that have legalized cannabis to operate without fear of federal raids and prosecution. This federalist-minded legislation would ensure states have the right to determine the best approach to the sale and consumption of marijuana within their borders, whilst still keeping in place other federal-level restrictions, including the ban on recreational sales to people under 21. Additionally, the bill would ensure lawful marijuana transactions are not considered trafficking and would remove hemp from the CSA's list of prohibited substances.

The War on Drugs

Almost 50 years ago, the Controlled Substances Act of 1970 classified marijuana as Schedule I substance, with no accepted medical use and a high potential for abuse.

To date, cannabis has been legalized in some form in over two-dozen states. This state-led legalization movement is a manifestation of a rejection of the failed War on Drugs. Despite this evolutionary shift in state policies, marijuana consumption and sales remain illegal at the federal level, with marijuana classified in the same category as heroin and LSD.

The categorization and criminalization of marijuana have created a slew of pitfalls and traps for businesses, patients, and state regulators. As a result, inequities exist for people of color, state-legal businesses and constant uncertainty about the future for legal cannabis plagues businesses and medical operators. Furthermore, the current classification of marijuana creates issues for those involved in research and testing.

In January 2018, the U.S. Justice Department and Attorney General Jeff Sessions ignited panic among cannabis businesses by rescinding the Cole Memo and subsequently opening the door once again to federal prosecution.

Despite rescission of the Obama era policies, the federal government has not conducted raids or seizures of cannabis companies for legal state sales. The lack of prosecution may reflect the current administration's true attitudes and a willingness to work towards a solution.

Not only has the Trump administration abstained from any new prosecutions but also, recently, in early June, in an unexpected turn of events, President Trump came out with his support for the STATES Act. “I support Senator Gardner,” Trump said when asked about the bill. “I know exactly what he's doing. We're looking at it. But I probably will end up supporting that, yes.”

Some believe, the President's support and bipartisan collaboration could just reshape the cannabis industry. Furthermore, Trump's support of the proposed bill serves as another sign that the federal government is perhaps prepared to ease if not eliminate legal state operators' fears of federal prosecution.

Access to Banking may be biggest Effect on California

California, in particular, is a state that would benefit greatly from a shift in the federal government's position on marijuana consumption. On January 1, 2018, California launched the nation's largest legal marijuana marketplace, but thousands of licensed businesses are still facing the threat of federal prosecution. Passing the STATES Act and lifting the federal ban could have large implications in California, especially in banking.

Currently, legal cannabis companies in California are experiencing difficulty obtaining business loans and setting up accounts. Major banks are hesitant to get involved in the blooming marijuana business because of overarching federal laws. As a result, many growers, processors and retailers operate on a cash-only basis, which makes them vulnerable to robberies and payroll- and tax-related issues, among others.

Last month, Senate Bill 930 was passed in the California State Senate. The bill is now headed to Assembly. If passed, the bill would create a state charter bank that would legally issue special checks that could be used to pay state or local fees and taxes, rent on property associated with cannabis businesses and vendors of the pot businesses, and to buy state or local bonds or warrants.

The proposed state charter bank would act as a good start, but it would still carry a limited scope relative to that of a national bank like JP Morgan Chase or Bank of America. Additionally, the benefits to the industry could be outweighed by the formation of a potential cannabis bank monopoly. For an industry that is expected to generate an estimated $10 billion in retail sales per year at full capacity, a broader long-term solution is necessary. Lifting of the federal ban could allow us to tap into the true potential of the industry.

Although Trump has voiced his support, his position could easily change. Additionally, the industry remains subject to GOP leadership and a conservative federal Justice Department. During his 2016 presidential campaign, Trump promised to defer to states that have already legalized marijuana, but later criticized related legislation. More recently, he has assured Gardner that he will “support a federalism-based legislative solution to fix this states' rights issue once and for all."

Lifting the federal prohibition would bolster efforts to create uniform testing and regulatory standards for marijuana, and potentially free scientists to pursue research into the medical uses of marijuana. This could open the door to medical advances and produce endless benefits to society. Here is to hoping the President's support is not a bluff.

What a great article, this is a win win situation. Time will tell

What a great article! It’s definitely a win win situation, let’s hope for the best, Tom