Alexa is Spying on You – But Will She Snitch On You Too? 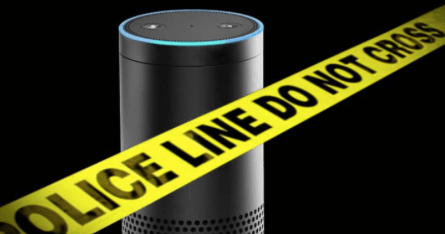 Prosecutors are collecting data from an Amazon Echo to use as evidence in a murder case.

You may think your Amazon Echo is a useful little personal assistant, but prosecutors are now trying to use data from Echo devices against criminal defendants in court.   So, watch what you say to Alexa!

First, in case you don't know, here's how the device works: Echo is a hands-free, voice-activated smart device that is “always on,” listening for your voice commands.     Once a command word is spoken – which is usually “Alexa”— the device responds. Alexa can play music, give you answers to questions, tell you the weather or latest news, and more. Alexa can even control and work with other appliances and devices in your home – such as your lights, your thermostat, or even your fridge.

But last December, Alexa made headlines when it was revealed that an Amazon Echo device had become a key “witness” in an Arkansas murder case dating back to 2015.   In that case, prosecutors allege that a man named James Bates killed his friend after a night of drinking at his home. Bates said it was an accident, but police claim there were signs of a struggle found at the scene. During their investigation, police found a number of digital devices in Bates' home, including an Amazon Echo device that was in the kitchen. To find out whether the Echo had any important recordings or clues related to the murder investigation, authorities issued a warrant for Amazon to hand over all audio recordings and other data from the Echo.

Amazon strongly pushed back against the warrant, citing First Amendment protections in a 91-page motion filed with the court.  The tech giant explained that, while its intent was not to obstruct the investigation, releasing the records would violate consumer privacy rights because “[t]he fear of government tracking and censoring one's reading, listening and viewing choices chills the exercise of First Amendment rights.”

Ultimately, Bates – who continues to proclaim his innocence – conceded the issue and gave permission to Amazon to hand over the information to police. Bates is set to go to trial for the first-degree murder of his friend sometime next year.

But although Amazon's fight is rendered moot at this point, the Arkansas case offers a true glimpse into the future of what's undoubtedly to come.  And it lays the groundwork for some tough, important questions like: What do devices like Echo actually record and save? Do we have a reasonable expectation of privacy when we use these devices? And what right does the government have to obtain information from these devices?

As smart devices have become increasingly part of our lives, there has been a new frontier in the way technology has been impacting our legal system. Just as we saw with the Apple-FBI standoff over access to a locked iPhone in the San Bernardino shooter case, it will be interesting to see how the tension plays out in court between privacy concerns and the pursuit of justice.

And future cases won't just involve Alexa either. Think about it – technology is all around us. We wear Apple watches and Fitbits wrists to track our movements. We swarm our homes with more and more things that connect to the internet – like cloud-based security cameras and Smart TV's that somehow tell whether we're watching. Arguably all the data these devices are collecting could one day be used as clues in a criminal investigation.

Ask Alexa herself. “Alexa, would you give the police recordings of me?” Her answer: “Hm, I'm not sure.”