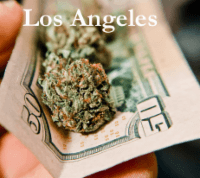 Los Angeles city officials dropped a long-awaited set of proposed cannabis regulations last week for how and where businesses can operate within city limits. The draft rules (that are now in a 60-day public comment period and still subject to revision) were unveiled as part of City Hall's rollout of Proposition M, a voter-approved law that authorizes City Council to license and regulate the weed industry. Although the initial draft still needs a lot of work, it's a big move in the right direction.

Here's a brief glimpse of what the application process might look like based on L.A.'s draft regs:

What Types of Businesses Can Apply for “Certification”?

L.A. is going to finally “permit” not only retail dispensaries in the city, but also cultivators, manufacturers, distributors, testing labs and delivery services (!) as well. Instead of calling it a permit though, the draft regs are calling it a “Certificate of Compliance.”  Businesses with compliance certificates will qualify for "limited immunity" from local prosecution.

[Note: The draft regs also allow for producing dispensaries (Type 10A) and transporters (Type 12), but these certificate types will eventually be removed from the final draft because the State Senate recently passed SB 94, the cannabis budget trailer bill, which doesn't allow for either license type on the state level.]

No Outdoor Grows or BHO Manufacturing

Only indoor cultivation will be allowed in Los Angeles. Outdoor and mixed-use light grows will be outright banned – even for personal use.

L.A. will also prohibit any extract makers that use butane and/or other volatile substances. Only non-volatile manufacturers will be allowed to operate within the city.

Existing Prop D dispensaries will get first dibs on city-issued compliance certificates. According to a detailed map released by the city, it was determined that there will be approx. 191 Prop D dispensaries that could potentially qualify for priority status under Prop M. (The more accurate number, however, is actually believed to be about 139 or less.) Prop M retailers will have a 60-day window to submit their applications once applications become available to the public -- which is expected to be Sept. 30th.

Second in line – indoor growers and non-volatile manufacturers who were operating before Jan. 1, 2016 and whose locations are compliant with certain zoning and sensitive use requirements.  The city is calling this group the “non-retail registry” applicants. Eligible non-retailers will have a 30-day window to submit their applications once applications become available to the public.

Applications from the “general public” won't be accepted until after existing Prop M dispensaries and non-retailers are considered. This could potentially take months. The general public includes the following:

In an effort to promote social equity in ownership, the city will also be implementing a diversity-focused program where the number of certificates granted to the general public will not exceed the number granted to applicants through a “social equity” program. The actual specifics of the social equity program are still extremely vague – but so far the draft reads sort of like an affirmative action plan where the city will give extra consideration to applicants coming from “marginalized communities” with higher poverty rates.  The general idea being that for every one general public certificate given, the city will issue one social equity certificate.  The draft regs, however, don't give us any useful information about who can qualify or how.

Only Certain Businesses Can Stay Open While Awaiting Certification

Only Prop M priority dispensaries and eligible non-retailers (who were in operation before Jan. 1, 2016) will be allowed to continue operating while their certificate applications are pending. The general public will not be allowed to operate until they successfully obtain a Certificate of Compliance. If a business is caught illegally operating during this time, both the business owner and the landlord will be subject to enforcement and a conviction could jeopardize their chances at city certification (and state licensing) in the future.

Location eligibility is arguably the single most important aspect of the draft regs. The regs seek to limit the locations of certain businesses to certain areas. For example, dispensaries will be: (a) limited to the city's commercial and industrial zones; and (b) prohibited from operating within 800 feet of schools, libraries, parks, substance abuse treatment centers and other dispensaries. Other cannabis businesses, including indoor grow and manufacturing facilities, will be: (a) restricted to the city's industrial zones; and (b) prohibited by state law from operating within 600 feet of schools, daycare centers and youth centers. Regardless of the business type, residential neighborhoods will be absolutely off-limits.

If your existing business is currently located in a non-compliant location, or if your business doesn't have a location yet, you need to re-locate. Depending on your build out needs, this could potentially mean that it's already too late for you to qualify for priority status. You still may have a chance at making the general public window – but you will need to find a compliant location for your business ASAP, prior to application.  We know that finding cannabis-friendly real estate in the city is not an easy task – so here are some zoning maps to help you with your hunt.

How to Make Your Voice Heard

Remember - these regs are still only in draft form and could be subject to change.  If you love or hate anything about the proposed rules, we encourage you to submit written comments via email or mail to the City Clerk's office:

After that, the city has a self-imposed deadline to finalize its regulations by September 30th.

Can one hire your firm for help in the licensing process?