The Use of Force: How Decriminalization Can Lead to Less Lethal Encounters with Police 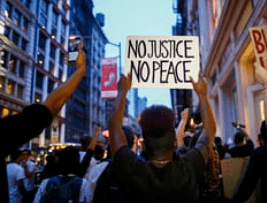 The use of police force in facilitating arrests has long been a topic of great debate and controversy. Current law weighs heavily in favor of police officers and unjustifiably affects minorities.  As a result, arrests for non-violent crimes and benign violations may result in extreme injustices and even fatalities. This leaves lawmakers, policy supporters and our communities working toward criminal justice reform as the proven solution for reducing the odds of an unnecessary lethal encounter between police and people of color.

Reasonable Force Allowed to Take a Suspect into Custody

Police officers' abuse of power has long been and still is a subject of much concern and controversy. Officers have discretion to use as much force as they reasonably think necessary to protect both the public and themselves. But critics and citizen advocates, especially those of ethnic or racial minorities, often oppose the way police officers employ their force – claiming that officers regularly abuse this power.

Police officers are generally allowed to use reasonable force to take a person into custody. If officers use unnecessary force, they can be subject to serious repercussions - such as criminal prosecution and civil liability. Courts determine whether an officer's use of force was unreasonable on a case-by-case basis, considering (1) the severity of the crime, (2) whether the suspect posed a threat, and (3) whether the suspect was resisting or attempting to flee. (Graham v. Connor, 490 U.S. 386 (1989)).

In application, it seems that the law is heavily weighted in favor of officers if they reasonably perceive a threat to themselves or others when they opened fire — even if that belief was mistaken. But should it be? The U.S. Supreme Court established that a police officer who has probable cause to believe a suspect poses a threat of serious harm may use deadly force to prevent escape. (Tennessee v. Garner, 471 U.S. 1 (1985) Use of that force must be accompanied by a warning, when possible. However, deadly force is unjustified if the suspect poses no immediate threat to the officer and no threat to others.

Critics of the current standard argue that the somewhat subjective determination of a threat and an affirmative warning isn't enough to prevent unnecessary deaths of members of the community, particularly people of color.

Although the state uses the “reasonableness” standard in practice, California's current law on use of force dates back to 1872 and allows “all necessary means to effect the arrest”. In April, California lawmakers proposed the Police Accountability and Community Protection Act, a dramatic change in the standard under which police officers can use deadly force. This Act creates a new “necessity” standard restricting the discretion of officers and only allowing the use of deadly force to prevent imminentphysical injury. In all other situations, police would be required to use verbal warnings, Tasers, and other de-escalation tactics to defuse a situation before resorting to more lethal methods.

The Act also seeks to establish that a homicide by an officer is "not justified if the officer's gross negligence contributed to making the force 'necessary'”. If passed, this Act would be the strictest statewide legislation of its kind. However, one thing that is missing is criminal penalties, leaving the decision about whether to prosecute still in the hands of prosecutors.

The California Police Chiefs Association recently held a meeting to denounce this proposal. David Swing, President of the association, stated that “evaluating the use of deadly force from the perspective of hindsight and narrowing the justifiable homicide defense will lead to officers pulling back on proactive policing, resulting in increased crime throughout the state.”

However, four (4) states currently have laws governing use of force that are higher than the Supreme Court's guidelines, though none go as far California's proposed bill. As a result, these states, police departments have experienced a 16 percent drop in deaths. In departments with more restrictive policies, officers were also less likely to be killed in the line of duty. Notably, data shows that stricter department policies had no effect on crime rates.

Growing efforts to decriminalize or legalize cannabis indirectly reduce these kinds of police encounters that can turn fatal. As noted by the Drug Enforcement Administration (DEA), cannabis overdose has never lead to death – but aggressive enforcement of drug laws has.

However, places that have decriminalized possession of small amounts of cannabis treat such offenses as infractions, the same as a parking ticket. Data shows that decriminalization typically leads to drastic reductions in the number of cannabis-related arrests. In fact, the month after the New York City Police Department announced it would treat low-level drug possession as a noncriminal violation instead of a misdemeanor, arrests plummeted 75 percent over a year.

Many drug policy reformers say decriminalization isn't enough, but it's a great start in the right direction.

Where is the Human rights of each in every people? Don’t use your positions in the government to hurt those small people.