State of California Temporary Licensing Applications for Cannabis Businesses – What Do You Need? 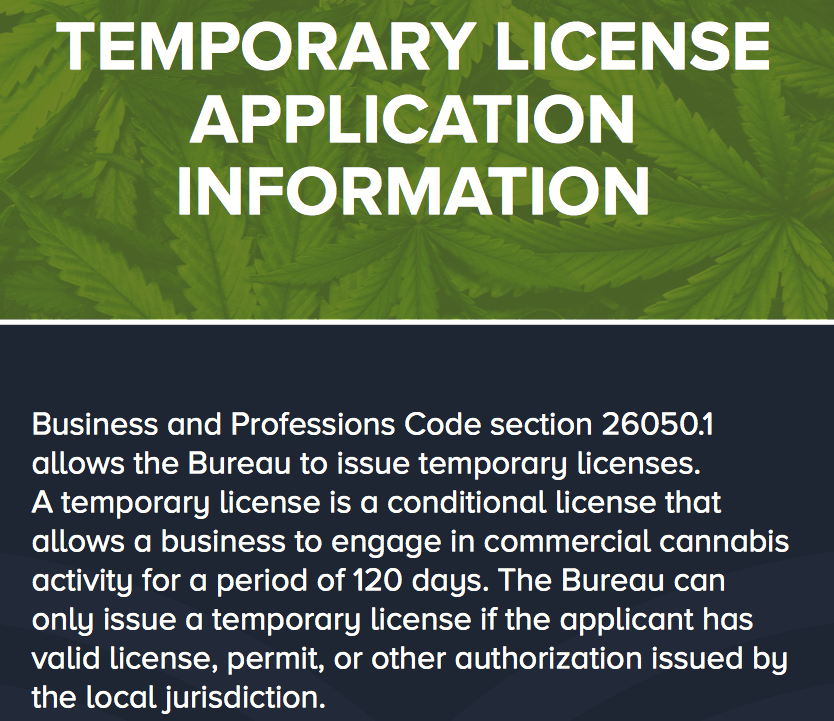 The State of California will soon begin temporary licensing for cannabis businesses, with the Bureau of Cannabis Control, CalCannabis Cultivation Licensing, and the Manufactured Cannabis Safety Branch all planning to accept applications online in December. The state is unclear exactly when it will issue these temporary licenses, but they will be effective no earlier than January 1, 2018. The temporary licenses will be for 120 days, though the state can renew temporary licenses if necessary.

As for what the temporary licensing application will entail, the Bureau of Cannabis Control has released a flyer. Most importantly, all applicants must provide a copy of their valid local license, permit, or other authorization. This license must be for the business's current location and must allow commercial cannabis conduct at that location. In many jurisdictions, this will be a conditional use permit for a cannabis use of land. All applicants must provide the state with a diagram of the premises, showing what they plan to do in each part of their premises. Please make sure that this diagram is accurate and describes in detail what you plan to do in each area. Most likely, you should have an architect or a civil engineer prepare the diagram. Indeed, if you went through local licensing recently, you may already have such a diagram, or the beginnings of one, for state licensing.

Other parts of temporary licensing application are obvious: name of the applicant, be it an individual or an entity; physical address where the cannabis conduct will occur; license type sought; license designation, meaning adult-use or medical; and the information for a primary contact for the application. Applicants must also provide the name, mailing address, and email address of all owners, as defined in Business and Professions Code section 26001(al) a person that owns 20% or more of a licensee, the CEO of the licensee, the board of directors of a nonprofit, or a person who will be “participating in the direction control, or management” of the licensee. Applicants must also provide proof that they own the property for which they are seeking a license, or have permission from the landowner for the activity.

CalCannabis Cultivation Licensing has not released an official list of documents for temporary licensing, but they have prepared a checklist of items that will be needed at some point in the application process. In addition to the items above, items include proof of the water source and any affiliated permits, a seller's permit from the California Department of Fee and tax Administration, and a surety bond valued at $5,000.00. Similarly, the Manufactured Cannabis Safety Branch has not released an official list for temporary licensing, but items that they encourage applicants to have include those discussed above and descriptions of procedures for disposal and destruction of waste, inventory control, quality control, and security. For manufacturers who plan to use volatile solvents or CO2 extraction, they will need a closed-loop system certification, signed by a licensed engineer.

Temporary licensing, as well as permanent licensing, will bring confusion, change, and frustration. But, the key is to stay nimble, flexible, and as organized as reasonably possible. Try to put together the documentation listed above to start – but remember that advice and items needed will change as the state releases more flyers, temporary regulations in late November, and permanent regulations in 2018.

On September 11, 2017, the San Diego City Council passed an ordinance to license cannabis cultivation, manufacturing, and distribution under one set of regulations and zoning, and testing labs under a second, looser set of zoning rules. For cultivation, manufacturing, and distribution, the City passed zoning allowing such businesses in light and heavy industrial zones with a conditional use permit. Such businesses must be 1,000 feet away, measured in a radius unless a barrier interferes with pedestrian access, from sensitive uses including schools, child care facilities, libraries, parks, playgrounds, churches, residential drug or alcohol rehabilitation facilities, and minor-oriented facilities such as a Boys & Girls Club. The City also set an overall cap on such licenses at 40 – meaning 40 licenses for these uses total. Clearly, this cap will lead to intense competition for licenses among qualified locations and operators. Other regulations for operations include keeping all operations indoors, having a security guard,

The City has not yet set a date for when they will begin to accept applications for these uses, but we expect the date to be in November 2017.