Business Valuations: How Much is Your Cannabis Business Worth? 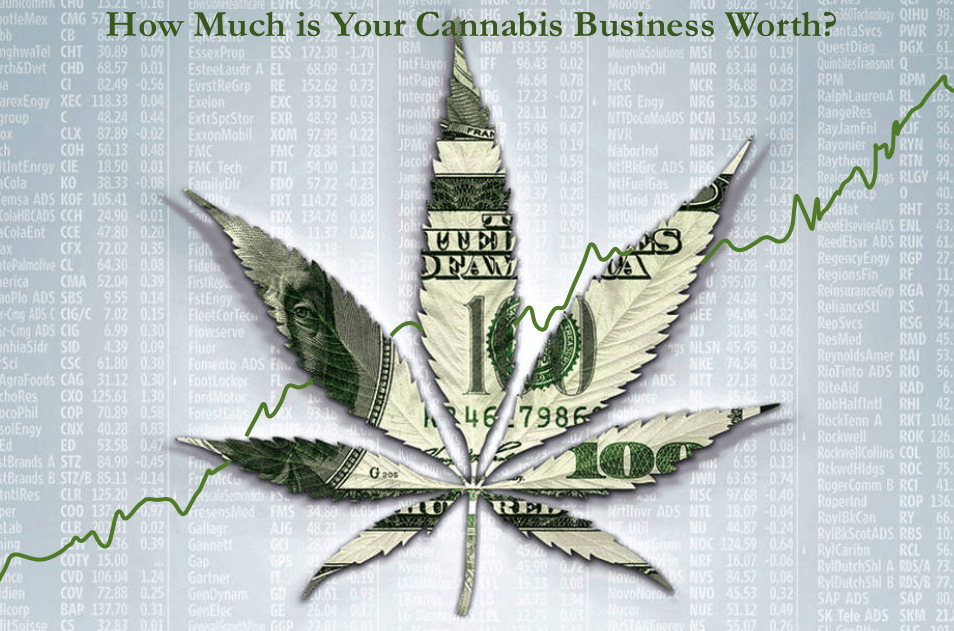 How much is something worth? It's worth what you're willing to pay for it, of course. That's the standard response when someone asks about the value of a business, or really anything you buy. There are some quantified ways valuation experts use to value companies that go beyond how much someone is willing to pay for something.

There are various ways to value a company. One of the simplest ways is to figure out the amount of revenue over the past year and set the price for that amount. This is popular with professional practices such as lawyers and doctors. It's also popular with cannabis companies because record keeping tends to poor in the industry and the most accurate records tend to be the revenue reported to sales tax agencies. If the company reported $2,000,000 in sales in the past year to the tax agency, then the company is sold for $2,000,000; pretty simple. It's weakness is that it doesn't correspond to the amount of cash you can receive from the company, the real value of a business.

Sometimes companies are involved in very risky investments such as oil extraction in an unstable country or buying a company in an industry whose legality is in question (sounds familiar?). Payback method means, the faster you get your money back the less risky it is so the less you need to get from the investment. You set your threshold of years to be paid back, in our example three years. Let's say the company you are looking at earned on average $100,000 each year in the past three years. You would be willing to pay $300,000 for the company. It's weakness is that it doesn't compensate you for forgoing your money during the investment period.

A company is worth the amount of cash it will give you. But a company doesn't give you its cash all at once, it gives you cash over time. But here's the thing - if you give money to someone and get paid back later you need to be paid extra for the inconvenience of having to wait for your money. In other words, a dollar today is worth more than a dollar tomorrow. This is known as Time Value of Money. But how much is the Time Value of Money? Let's answer that in two parts: (1) by figuring out how much you need to be paid for not having access to your money if you were virtually guaranteed you will get your money tomorrow, or your Risk Free Rate; and (2) then see how risk effects that. In today's world a "risk-less" investment is a US treasury bond or note. I know what you're thinking, how do we know the US will actually pay it's debts and how about European Union Notes and Bonds etc. Nothing is actually truly without risk, but for our purposes we will use the rate of a 10 year Treasury Bond because it is the closest amount to risk free that we have, which is 2.235% as of this writing.

That's all well and good but if you buy a company you are buying a very risky investment, there's a good chance you will lose all your money. That means you have to be compensated for that extra risk by increasing your discount rate beyond the risk free rate. How do you figure that out? You compare it to a public company and add an additional factor since the company isn't public. As a rule of thumb, for a cannabis company add between 10-20%. So if we use 15% (midrange) the discount rate would be 17.235%. That means if you invest a dollar today you need to get back $1.17 in a year to make it worth your while.

The rest of discounted cash-flow is beyond the scope of this writing but to give you a feel for it you use the same discount over five years of cash-flows with each future year getting more and more discounted and then add what's left to a terminal value of the fifth year.

This method is the most accurate since it's based on the future cash-flow you can receive, but its weakness is that it's complicated.

"I don't care about all these crazy calculations. I have a local license in my city, I don't have operations but I have people willing to pay a million dollars". Better yet, "I have two million dollars in revenues with a Los Angeles 'pre-ICO' permit and I'm getting offers for $10,000,000 so I think your valuations are dead wrong." Why does this happen? This is called speculation value. Companies exist to make money, their value is based on how much cash they provide their owners. Sometimes people don't buy investments because of the cash they can provide; they buy investments they believe they can sell for a higher price in a short period of time. This is known as speculation value, or less charitably, 'the greater fool theory'. This is a successful way to make quick money... until it isn't (think 2008 housing bubble). As a rule of thumb, if the value of the cash-flow is lower than the price, then the price is inflated by speculation value. The flip side to this is, if someone is willing to pay you speculation value, it's a good time to sell!